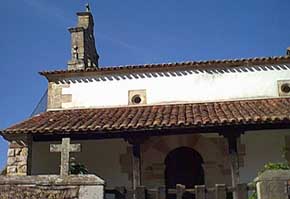 In this little village the most interesting thing, because of its antiquity, is the hermitage of San Fructuoso de Lamiña. Located by a wooded area in the highest part of the village and with very humble appearance, the chapel of San Fructuoso has a very old origin. It appears cited in an ancient Spanish document wrote in 978, known as the Cartulario of Covarrubias: "In Kaornega, illo monasterio Sancti Fructuosi que vocintant illa Mima"

Dating to that period have been preserved two small columns with their capitals and a beautiful and valuable complete sarcophagus with decoration of circles, swásticas and inscribed curved squares . At their feet appears a processional cross of Asturian style. The church of the village conserves a blessing stone bowl coming from this hermitage, with pre-romanesque entwined string-like decoration and different wooden images, like the IX th century statue of San Fructuoso.

The Sautuola Institute of Prehistory and Archaeology, under the direction of García Guinea, Van den Eynde and Rincón has recently (1985) carried out archaeological excavations that have exhumed a medieval necropolis and foundations testifying the existence of an old monastery. The present hermitage is dated much closer to our time, very possibly to the XVII century.

From the village it is worthwhile to admire the typical houses with balconies and exposed beams carved in array of different proportions and wide wooden eaves. It also stands out a spring popullary called in Lamiña "Roñosa"(Rusty) which is a source with strong ferruginous character ( iron water) good for some stomach illnesses and which bowl is the head of a sarcophagus surely previous to the IX th century. Another complete sarcophagus can be seen in a different source not far away. 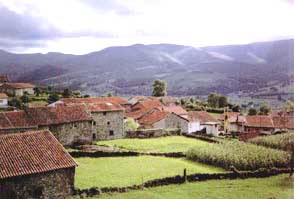 Rut or heat period of the Common Deer.